The P&S began with a logo separate from parent P.S.&N., it was a simple white hexagon with the letters P&S inside.  The best example I’ve been able to find is this HO scale hopper, I think the same logo may have been red later on some of the steam tenders.

Later, the above changed to a more commonly know hexagon with SHAWMUT in all caps in black inside a white double arrow with P&S and above and R.R. below in white like the one at the top of this page. 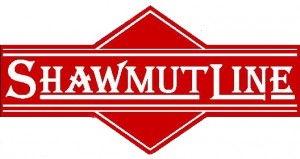 In the mid 1970s as the P&S began using 100 ton hoppers they made another change to a logo like the P.S.&N., except instead of green and yellow it was a red bar-diamond with white letters.  They also lettered engines, cars, and cabooses as SHAWMUT LINE. 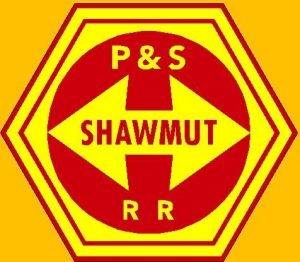 Only the three GP7’s (357, 10 & 11) had the red bar-diamond logos.  After the SW9’s were repainted red, white, and blue the switchers had no logos.  When the SW9’s were red and yellow the above logo appeared on the cab sides.

A variation occurred with the 200 series 100 ton hoppers, they had the hexagon logo, but the double arrow was black with SHAWMUT in white. 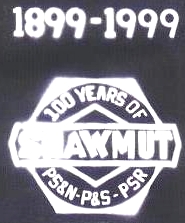 A 100 year celebration logo was painted on some of the hoppers after the P&S became part of BPRR.  Not a very good example, the photo was taken on the side of one of the hoppers. 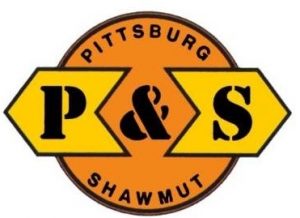 This G&W era logo exists, but was only used on some MOW equipment.  After the G&W takeover the P&S reporting marks became PSR.

I don’t think there are any more SHAWMUT LINE lettered hoppers in use, but there may still be some plain hoppers with PSR on them.

In conclusion I suppose it’s only proper to include P&S’s parent railroad Pittsburg, Shawmut, & Northern’s green and yellow bar-diamond log.