Those very familiar with the P&S know in 1953 the Shawmut changed from steam locomotives to nine EMD SW9 switching locomotives painted in a bright red and yellow scheme.

Beginning in the mid 1970’s they were all repainted red, white, and blue honoring the USA’s Bicentennial.  (They were actually rebuilt, not just repainted.)  Here’s a one by one look at the SW9’s in red & yellow and then red, white & blue. 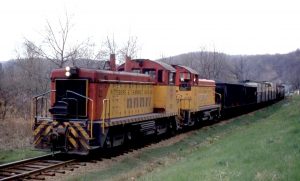 Above is 231 on a Kittanning local.  Note the green and white Linde cars! 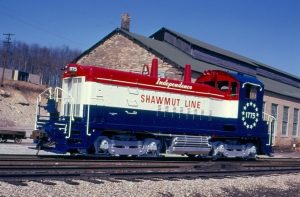 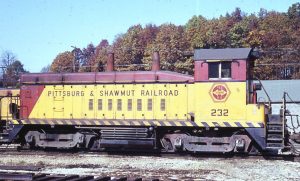 Next was the 232 seen here at Brookville.  The original red and yellow paint jobs had three stripes on the very front angled area, when the paint was touched up that area became solid red. 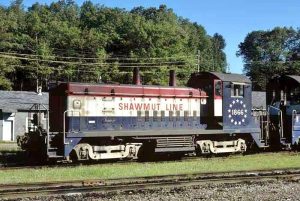 The 232 became 1866 and named Oliver Winchester although by the time this photo was taken the names had been painted over. 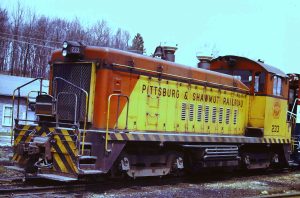 Here’s P&S 233 also after having had its paint touched up.  Looking close you can tell some of the units have already been repainted red, white, and blue. 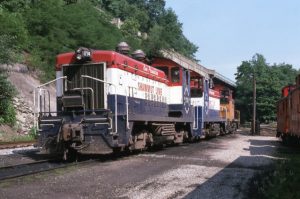 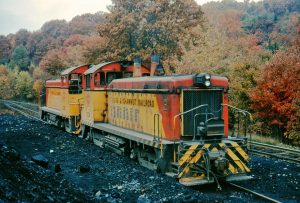 Here’s the 234 around Knoxdale (a Mike Woodruff photo) what could be more colorful, fall colored locomotives during the fall color change! 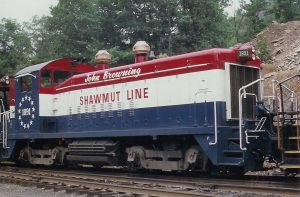 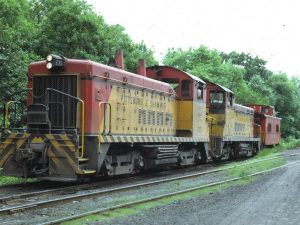 Here, P&S 235 was teamed up with the 237 and a caboose and is seen returning from the Linde plant just south of Kittanning in this Randy Kiser photo. 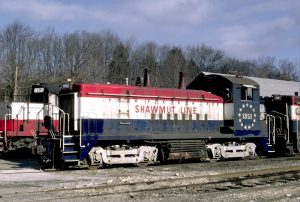 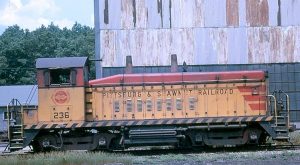 Next is the 236 also at Brookville still in original paint in 1967.  Later when the red and yellow paint was touched up the lettering was shortened to PITTSBURG AND SHAWUT. 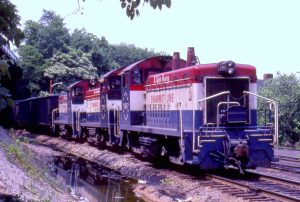 The 236 became number 1865 named B. Tyler Henry” during the Bicentennial years and was southbound at Kittannint/Applewold here.

Here we have the 237 southbound approaching Markel, another that was touched up and lettering included “AND” instead of “&”. 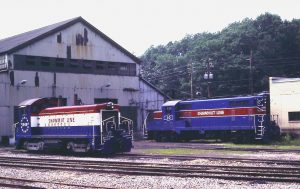 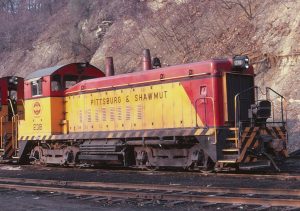 Next of course is number 238 at Kittanning, another that had the red and yellow paint touched up, but this time lettering included the & instead of the word and and “railroad” was let off. 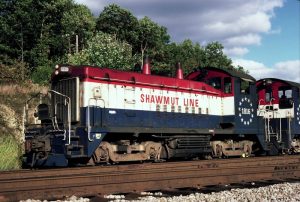 For the Bicentennial 238’s new number was 1816 and named Eliphalet Remington although by the time David Bear took this at “BV” the names had all been removed. 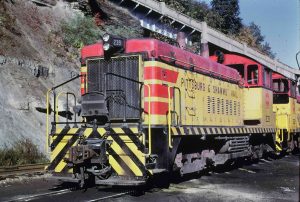 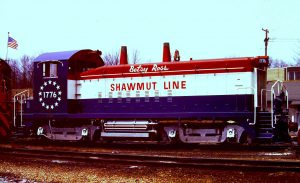 The 239 became famous taking on the name Betsy Ross and numbered 1776 seen here from Dave Hamley in 1975 while her paint was still fresh as the other unit on the left awaited its turn to be repainted. 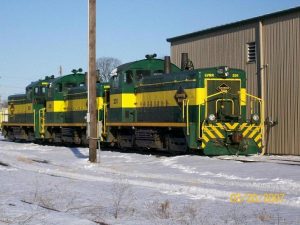 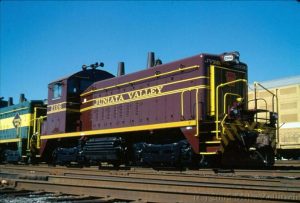 Epilogue – Shawmut and Mountain Laurel  locomotives went all over after the 1996 sale to G&W.  Four of the SW9’s ended up in central PA,  Lycoming Valley got three and painted them in a Reading inspired green and yellow scheme and were given their original P&S numbers, 231, 238, and 239 seen above in this Mike Zollitsch photo.  The 4th was former 236/1865 in this PRR maroon and gold, photo also from Mike on Juniata Valley as their 2106.