Thought I’d share some info and photos from the Orlando, FL area where I’ve lived the past 60 years.   It’s no secret this is a huge vacationing area with Walt Disney World, Sea World, and many other tourist attractions so if you find yourself heading this way, you’ll have a little idea of what keeps the rails shiny here.

It’s a busy area for railroads.  We have the Amtrak Silver Star, Silver Meteor, and Auto train which is one of the most popular trains.  Although, right now the “Meteor” isn’t running.

The new Brightline system following the Florida East Coast Rail line from the Miami north to Cocoa is currently operating in south Florida, but also under construction west from Cocoa to Orlando International Airport with hopeful future plans of connecting with CSXT and possibly even one day connecting with the Tampa area.

Most of our freight moves via CSXT which only moves on the mainline during SunRail’s off hours and consists of manifest freight, vehicle cars/autoracks, a lot of rock, and coal to the Orlando Utility Commision’s power plant consisting of 2-3 110 car trains a week.   Additionally Regional Rail, LLC  operates the shortline Florida Central, a former Pinsley line running from Lake County and ending right in the middle of downtown Orlando.  They interchange with CSXT at Taft yard south of downtown three nights a week.

As you can tell from the above, it’s a busy area for railroads with around 50 trains a day during the week.  Well, that’s a bit distorted since 40 of them are SunRail trains with many of those the same short trains back and forth. 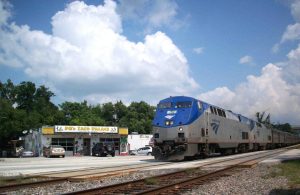 Will start off with this shot, to the left is “PR’s TACO PALACE,” might you guess it was a favorite eating establishment for train buffs?  And that’s southbound train P097, Amtrak’s Silver Meteor back in 2010.  Alas, the coming of SunRail brought an end to PR’s at this spot, however PR’s lives on about 15 minutes away, of course no longer trackside.   They call it progress. 🙂 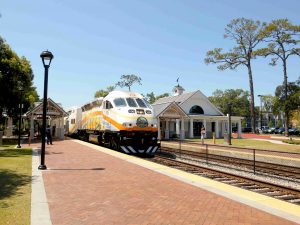 Since I live in Winter Park here’s a northbound SunRail train at the Winter Park Amtrak station in 2015.  The SunRail station is actually the covered walkways on each side of the tracks where Amtrak’s station is the larger building. 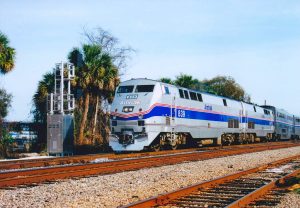 Amtrak’s extremely popular Auto Train’s southern terminal is at Sanford, FL 20 miles north of Orlando, here northbound P052 is easing out on to the mainline at Sanford back in 2001.  Auto Train is the longest passenger train in the USA and most unique as passengers are required to bring a vehicle along!  Thus, a typical consist might be 15 passenger cars and 30 auto carriers. 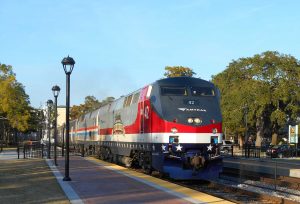 In 2014 I caught this southbound P937 Amtrak special hauling a special train to Miami with all new baggage cars to the shops to be placed in service.  This is looking north on the north side of the Winter Park station. 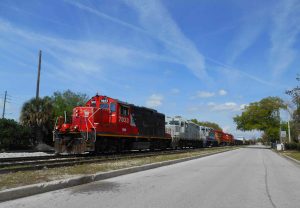 In March of 2014 I drove by shortline Florida Central’s Modello Yard just a couple miles north of Downtown Orlando and found this colorful lash-up.   Two things were going on, FCEN was adding new power and transitioning into a new paint scheme.   They are the HQ for Florida Northern in the Ocala area northwest of Orlando and Florida Midland in the Winter Haven area southwest of here. 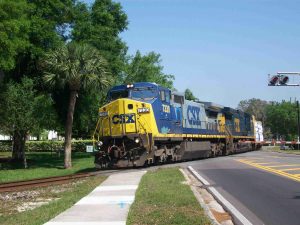 For decades our daily mixed freight has been Q455 as seen here in Maitland, FL, it’s no different today, but this one is usually in at night now and comes up the back way. 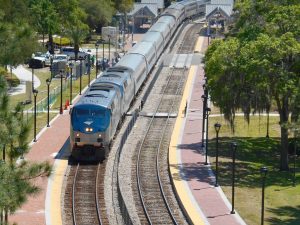 What might appear to be a drone shot is actually from the top of a parking garage.  You’re looking at Amtrak’s Silver Meteor (P098) making its station stop here in Winter Park where I live.

Hope you’ve enjoyed a look at some Central Florida trains!