American freight railroads for more than a century usually had two special highlights, the locomotive at the front (and sometimes more in the middle or near the end) and a “little red caboose” at the end.

The caboose was typically referred to as the “office” of the train where the conductor shuffled paperwork getting the train in order between stops.  Rather sadly the caboose faded out during the 1980’s, even on the Shawmut. 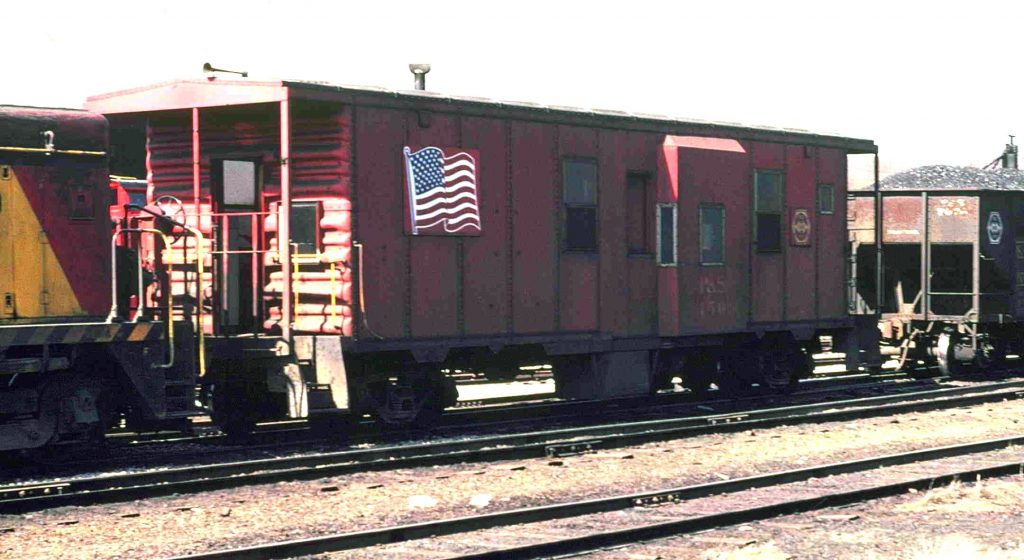 Most of the P&S R.R.’s cabooses were typical, originally wooden then merging into metal ones.  Two in particular stood out as very unusual.  Those were formerly boxcars converted into two bay window cabooses, big cabooses!  Here’s one at Brookville, not a great photo, will find a better one.  The two were numbered 150 and 151. 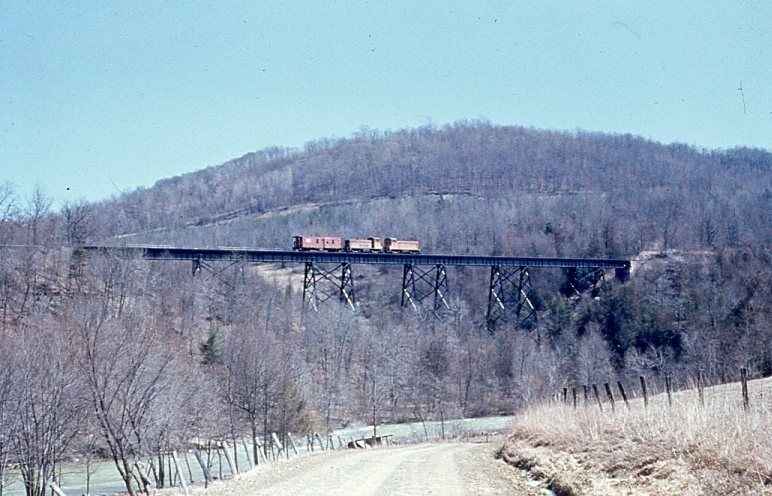 In this photo on one of the viaducts in the Putneyville area you can see how big they were compared to the SW9’s! 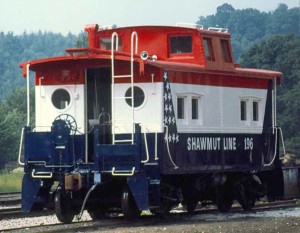 Another interesting P&S caboose was the 196, interesting is this unusual Bicentennial inspired red, white, and blue paint job! The photo is from Dudley Dumaine’s collection. 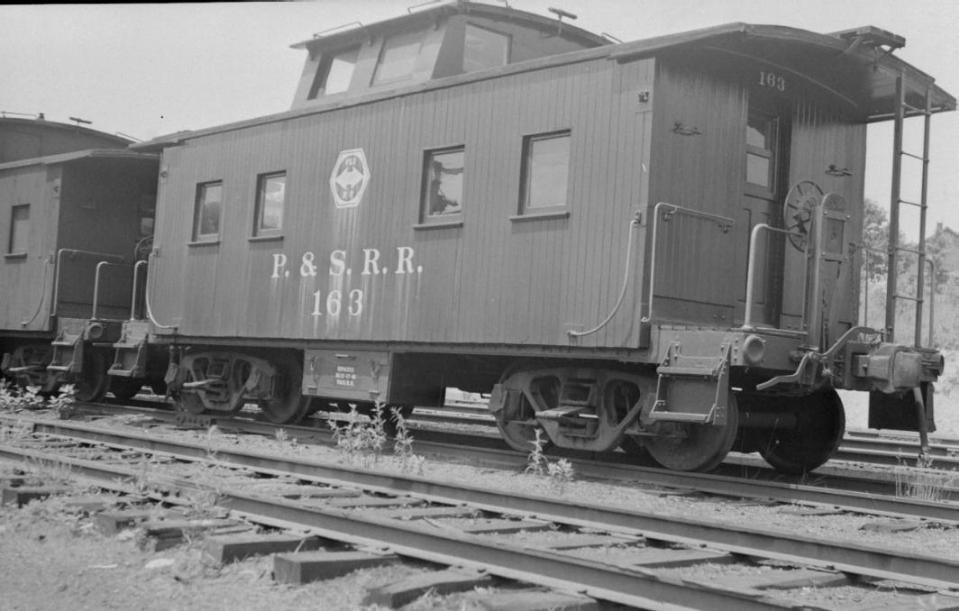 Here’s caboose 163, one of the earlier wooden ones.  Note how the white logo, lettering, and number paint have run due to weathering.

Above we have PS&N 186 with the SHAWMUT LINE logo which the P&S would adopt in the mid 1970’s with quite an image change to their parent’s railroad! 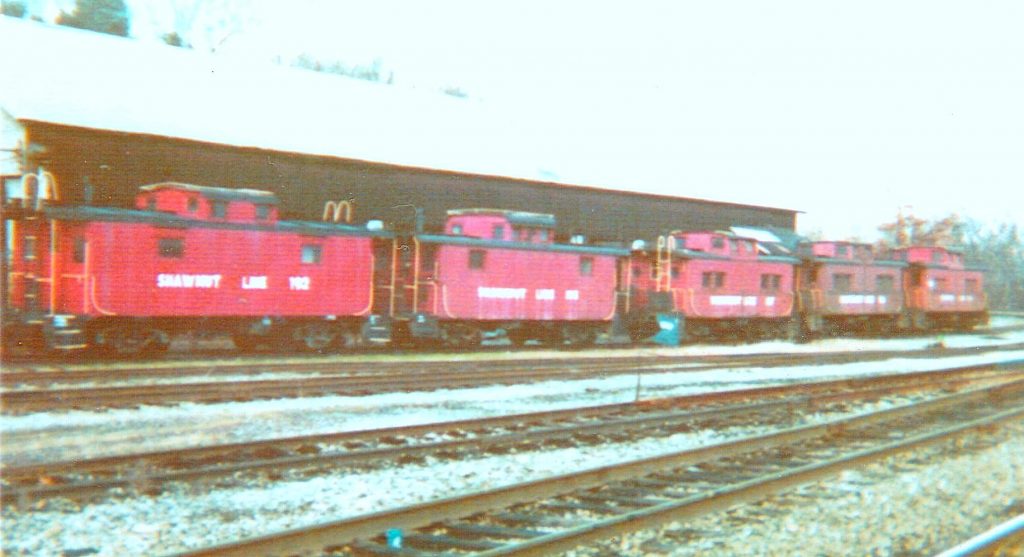 Not such a great photo, but here we have five of the P&S’s SHAWMUT LINE era photos all on the “caboose track” at “BV” with two of the four window and three of the eight window cabs, that’s two windows or four windows on each side.

Above we’ll skip many decades ahead for this unusual B&P caboose, likely more of a “shoving platform” – note the late P&S era “PSR” hopper. 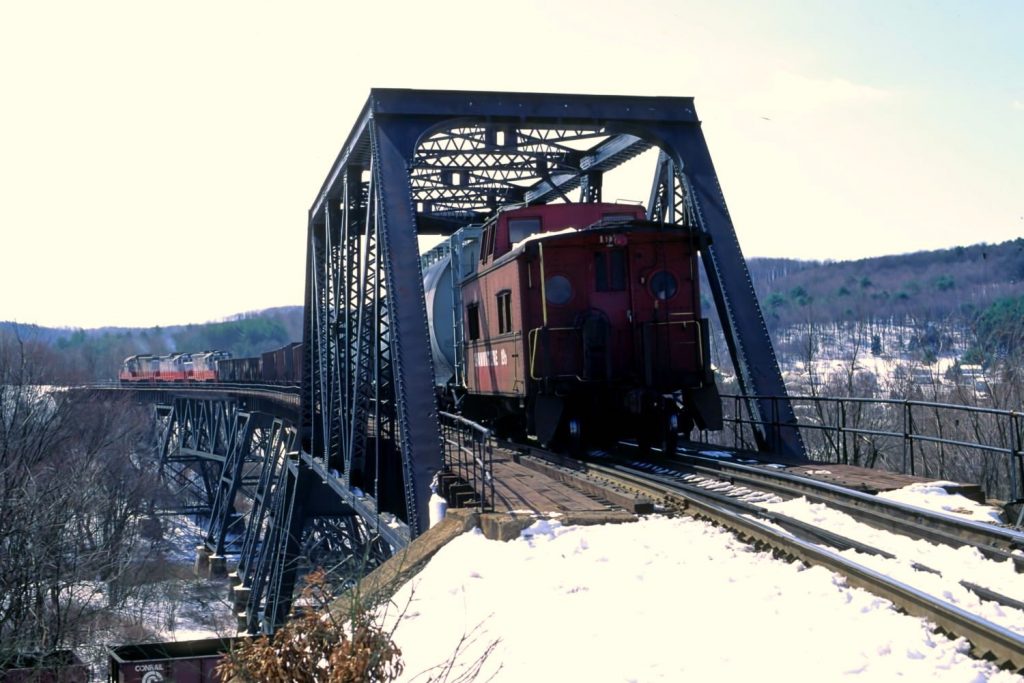 At the Brookville viaduct a southbound is heading out to work with a short train sporting a caboose on the end, what’s rather unique about this photo is on the other end, three Mountain Laurel GP10’s for power!

Check back here again, this is not “the end” (pun intended) of the caboose section!