Being primarily coal hauling railroads, it’s only logical both the P&S and parent PS&N, had many coal hoppers over the years.   This section includes info and photos on some of those cars. 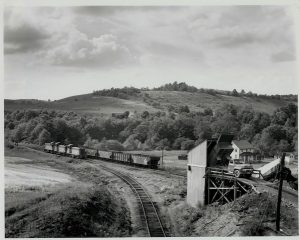 The P&S also used hoppers from other railroads such as B&O, Erie, P&LE, etc. in the 1950’s as this Bill Bueller photo in the Markle area near the local swimming hole “Gravel Pit.” 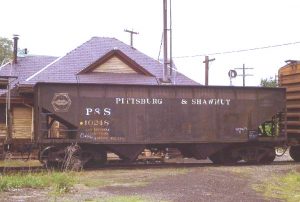 This P&S 55 ton smooth side hopper #10218 is a good example of the hoppers used for many decades, especially the 1950’s & 60’s.  Rib sided 55 ton cars began to replace these and finally in the early 1970’s the P&S began obtaining 100 ton cars.   Looks like this car’s lettering was quickly done over with a “goof” on the & sign not being centered. 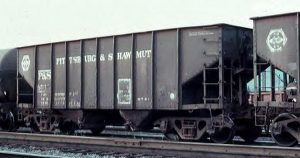 Above is a typical example of the rib sided two bay cars.   After the P&S started using 100 ton cars which were send to other railroads for various power plants, the West Penn Power plant at Reesedale continued to use the smaller cars for years. 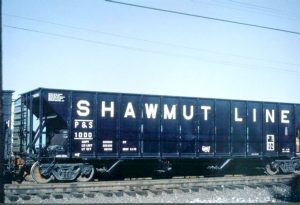 P&S 100 ton car is rather odd, has no logo, obviously in very new condition, perhaps not even in service yet.

Perhaps just my opinion, but as 100 ton cars were added and the former PS&N logo (in red and white) and SHAWMUT LINE lettering flourised, helped put the P&S on the map, after all one can’t miss which railroad cars like this are from! 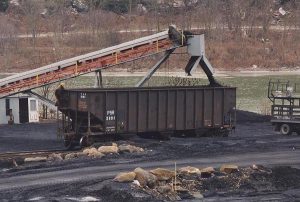 After G&W took over the P&S in the 1990’s the PSR reporting marks were born.  Freddy Shook caught this PSR era car loading at the small loader north of Kittanning. 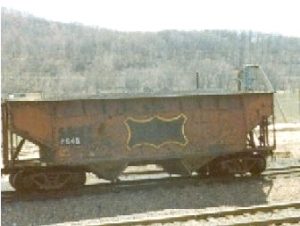 A somewhat unusual hopper is this former Frisco car, a few of these 55 ton cars were used in MOW service to haul ballast rock. 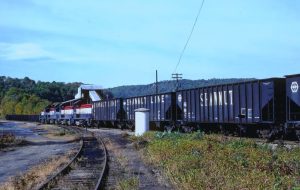 From the 1970’s through the end 100 ton cars ruled on the Shawmut and could be seen all over the northeast.  Here’s a little variety on the same southbound train at Colwell back in the 1980’s.  The far right car was one of the earliest 100 ton cars with just SHAWMUT centered.  Shortly after, SHAWMUT LINE lettering became most common and with such large lettering helped the P&S become much more well known.