Another fascinating interest about the P&S were the five tunnels spread out in the middle section of the railroad.  There were Knoxdale, Coulter, Mauk, Mack, and Mahoning.  Here’s more info about them including length and approximate location & milepost. 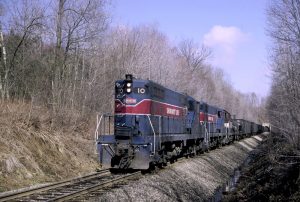 North to South the first tunnel is at Knoxdale and David Baer caught a southbound in March 1991 just after emerging from the tunnel.  The train was also somewhat odd having two GP7’s and one SW9.  Of course, this was during the short Red Bank, Mountain Laurel area and all available power was needed.  Also, behind the power was a tank car of diesel fuel  heading to the engine shop at Kittanning to fuel the engines there.