One of the many fascinating things about the Pittsburg & Shawmut was their trestles which on the P&S were called viaducts.  This section is about the longer trestles, but there were many smaller bridges over creeks, roads, etc..

There were thru truss bridges crossing Mahoning Creek south of Colwell, and the big thru trussbridge crossing the Allegheny River at Reesedale that were also called viaducts.

Here’s location, length, and milepost info about the viaducts: 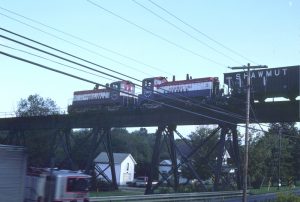 The first sizable viaduct and a rather unique viaduct was heading railroad south out of Brockway where the Shawmut crossed RT 219 (Pittsburgh Buffalo Highway) as well as the former BR&P/B&O now B&P, and Rattlesnake Creek in this photo from S. Kolata. 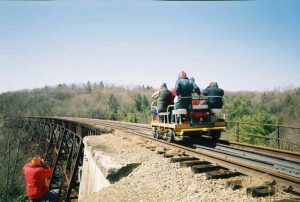 The next trestle south of Brockway was Little Mill Creek Viaduct a mile or so north of Brookville Yard.  Unfortunately, that’s one spot I never got a photo of a train on, here a group of motor car enthusiasts got to ride over the P&S north of Brookville after the track had been taken out of service, not long after the trestle was torn down, so far it is the only of the long P&S trestles to be removed. 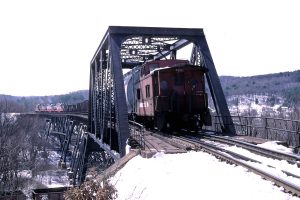 A short southbound with three Mountain Laurel units stretches out over the Brookville curved viaduct.