On the Pittsburg & Shawmut coal was always the railroad’s main source of income so many coal mines and coal loaders came and went over the years.  Here are some photos and info about those coal operations. As always, this wouldn’t be possible without cooperation from so many Pittsburg & Shawmut employees and fans, so THANKS!

In the earlier years many of the loading facilities were small and simple operations with just a handful of cars loaded each day.  Local trains from Brookville, Brockway, and Kittanning switched out empty and loaded cars as needed.  Rounder trains picked up loaded cars here and there building up much longer trains to be sent onward on other railroads such as Baltimore & Ohio or Pennsylvania.  The major interchange points along the P&S (north to south) Brockway, Dellwood, Brookville, Mosgrove, and Freeport. 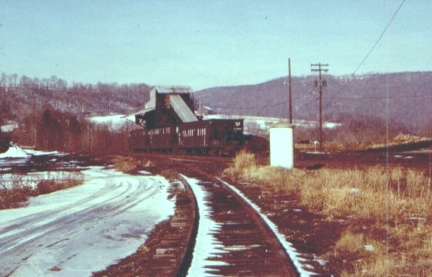 One of the more unique coal loading spots along the P&S was the area below (railroad south, compass west) of the Highway 28 & 66 bridge over Mahoning Creek and the P&S.  Here we’re looking at the Colwell loader from the short branch to the Reid mine loader.  Just RR south (to the left) was the REDDCO loader.  REDDCO and Colwell loaders were two of the loaders that hung on fairly close to the end of the line. 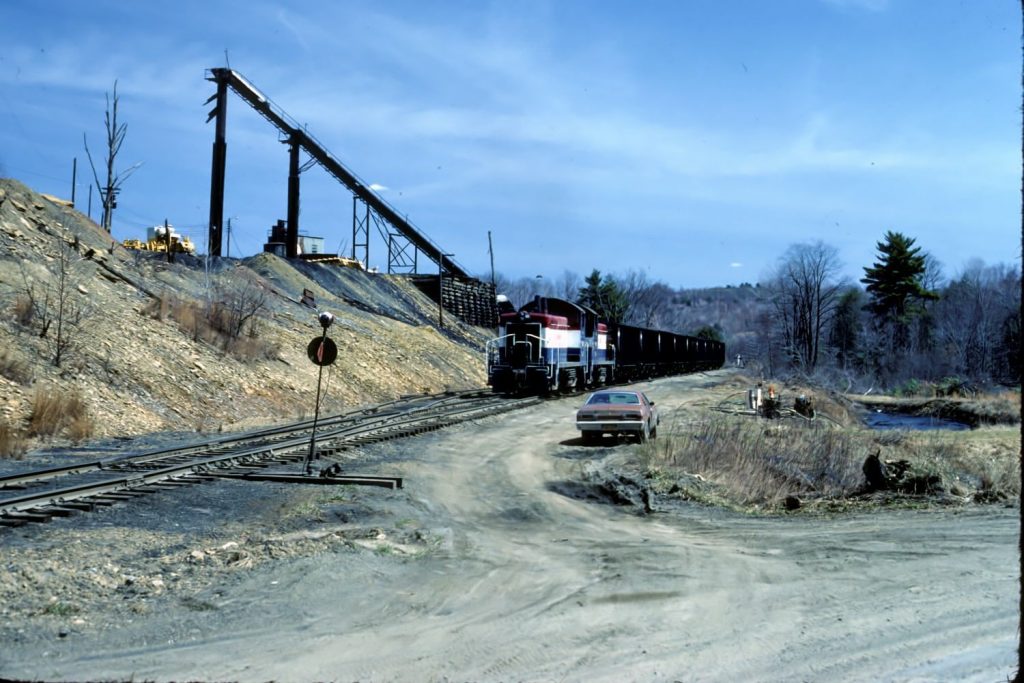 Between Timblin and McWilliams, just RR north of Route 839, is an area often referred to as Markle.  This photo is at the Harmon loader.  Note that in earlier years what today is often referred to as coal loaders were usually called coal tipples.  Also a little further north in this area was a popular local swimming hole referred to as “The Gravel Pit.” 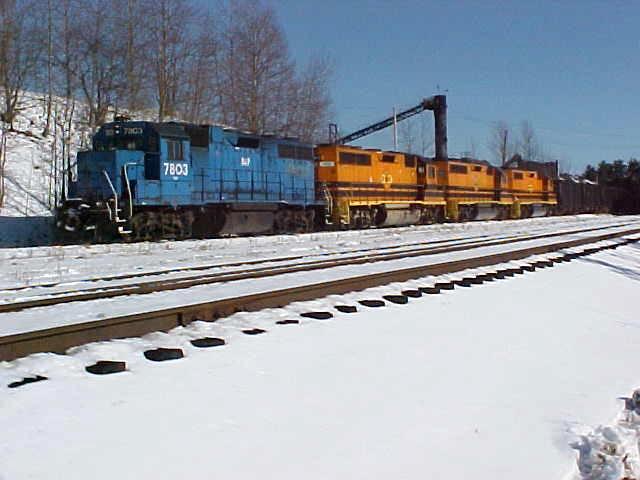 In the later years the P&S had purchased the “Low Grade” line that ran from Driftwood to Lawsonham, but just before that they picked up the line from Lawsonham to Sligo and called it the Red Bank RR.  After the B&P had taken over the Shawmut here was one of the trains at the Shannon Tipple at the end of that line at Sligo. 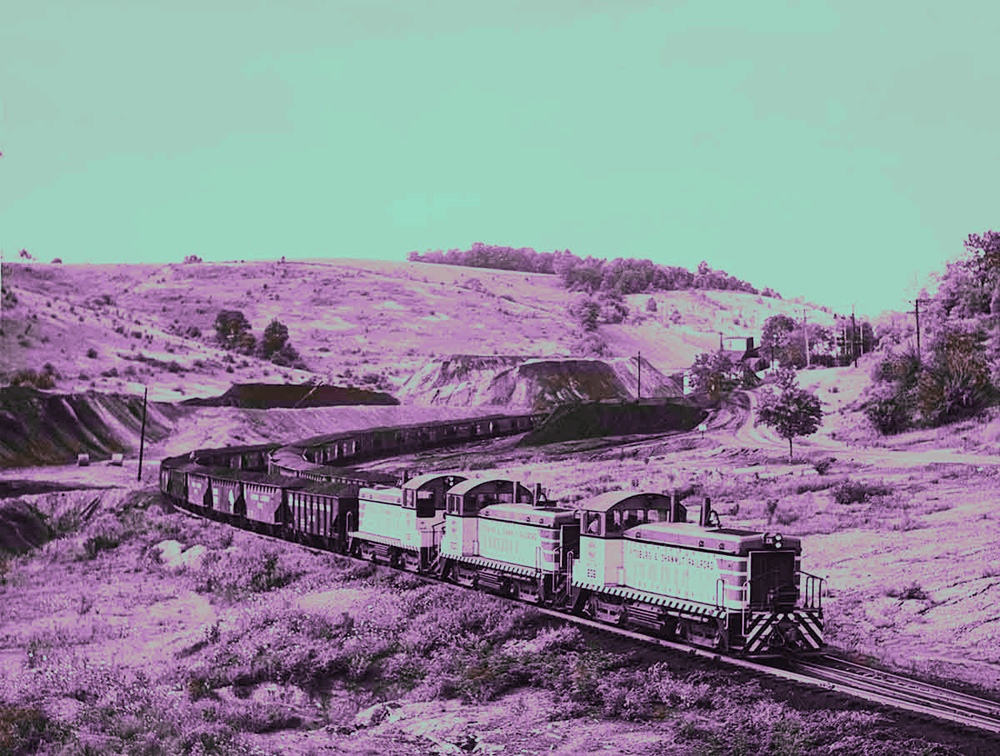 From the 1970’s to the end of the P&S there was a huge coal loading facility at Dora.  Prior to the Dora loader of the later years was this big loading facility, at Ringgold also known as Sunnyside or “Sunnyside Mine.” 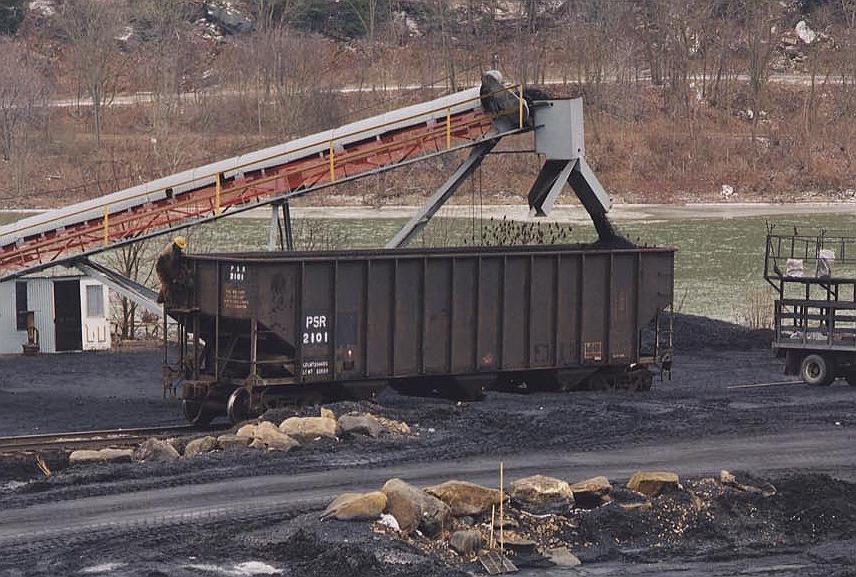 This loader was between Kittanning and the branch at West Mosgrove up to the PRR then Conrail.   As you can see, the loader was loading into the hoper when the photo was taken in the “PSR” era after G&W/B&P had taken over. 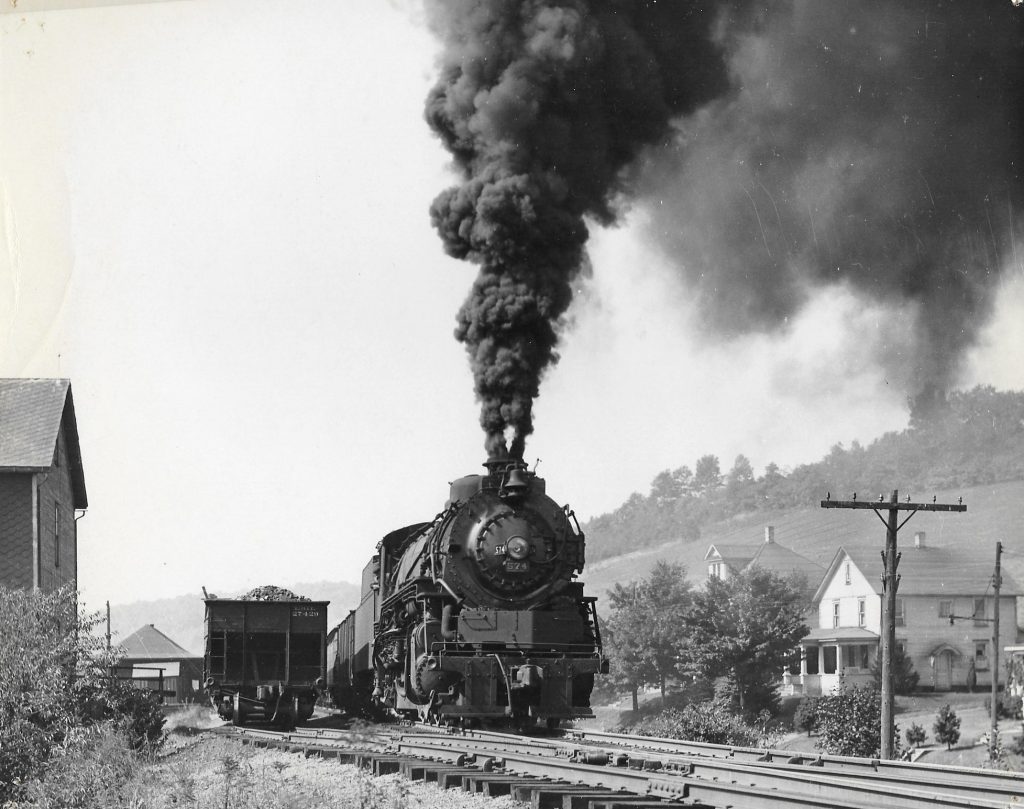 Timblin was at milepost 44, dead center of the 88 mile long Shawmut and besides the station sported a short siding with Snyder’s Mill (the building on the left) and a coal loader.  As you can see, loaded coal hoppers await pickup as this northbound steams ahead long ago. 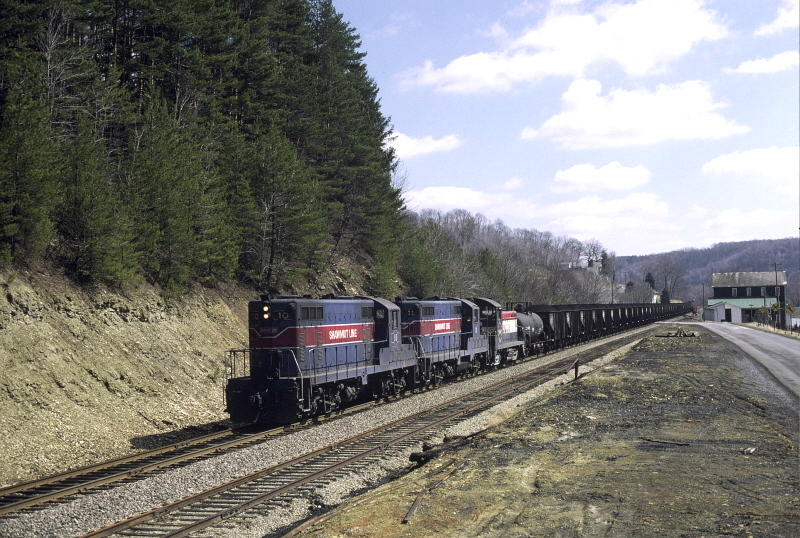 In David Baer’s photo above many years later a southbound Brookville local passes the spot where the Timblin coal loader was, the station was gone here, but the old Snyder’s Mill building was still standing. 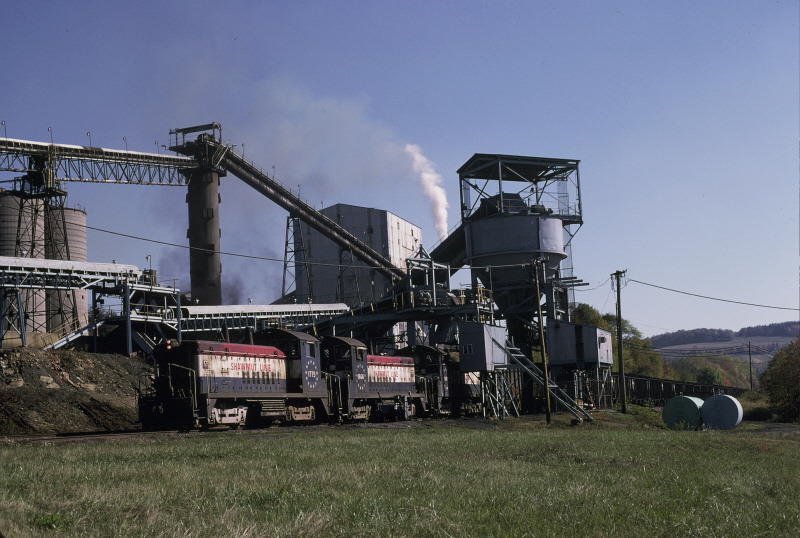 Here’s another of David Baer’s photos, this one at the huge loader at Dora where a Brookville local is flood loading.  This facility was in the area railroad north of the Lost Hill Rd. underpass and just to the south was Ringgold siding where cars were stored and/or sorted out.  Ironically, Ringgold, the town wasn’t on the P&S, but the underground mines stretched towards the town and is likely why the spot on the railroad was called Ringgold. 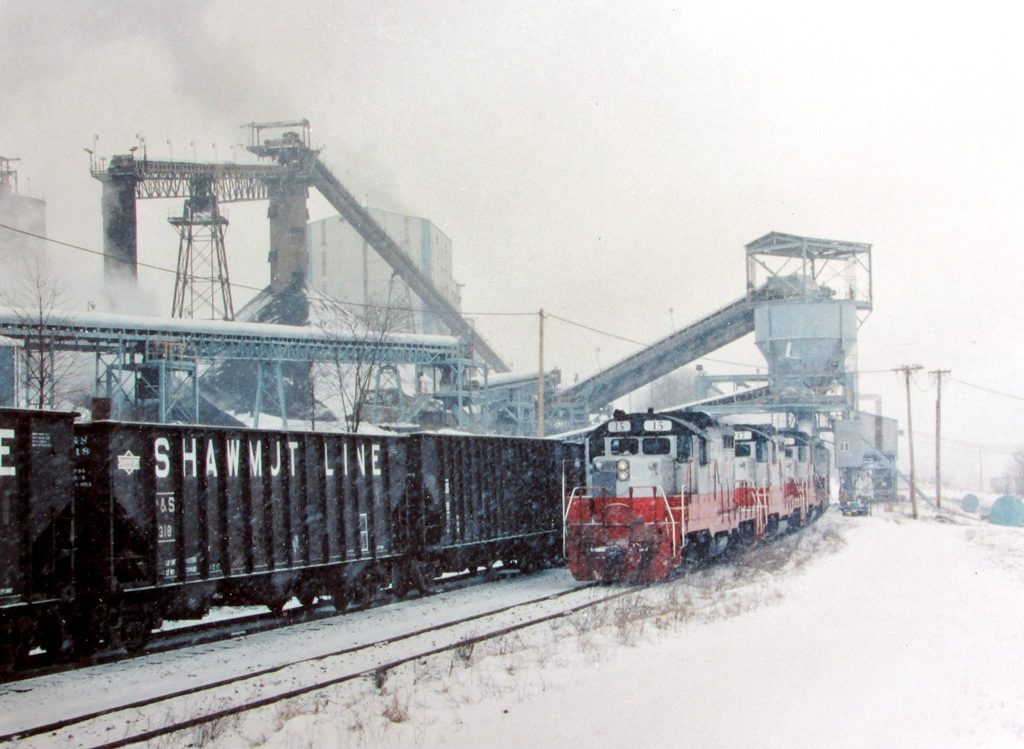 BRRRR!  Here’s the Dora loader again in a different era and time of year.  In this one Jeff Van Cleve caught Mountain Laurel units loading at Dora. 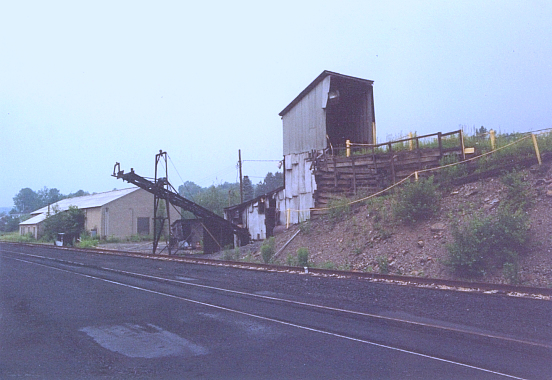 This loaded was in Brockway Yard in the 1990’s where trucks backed up the dirt mound and dumped their loads which were processed however that loader did it, then up the chute’s conveyor belt and into P&S hoppers below.  Note the long abandoned former concrete block engine house on the left. 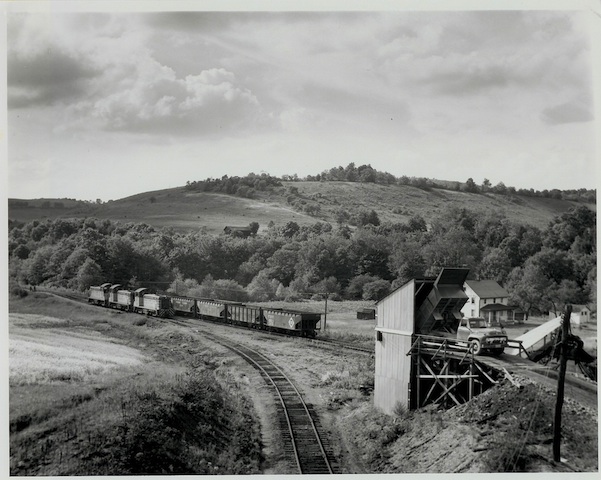 Here’s an amazing Richard Cook photo from 1954 at Markle!  Note the similar dumping bridge this time with a truck actually dumping while a P&S train is working.  The photo is looking railroad south and the tracks at the bottom middle of the scene go to a Freebrook Company loader.  The loader pictured was one built by Irv Bullers and his two sons Jimmy and Bobby.

I’ve been most fortunate to have heard from Bill Bullers several times over the last few years who has provided a lot of historical coal operation info as well as photos.  Bill’s father, Irv Bullers operated coal loading facilities at Ringgold and Markle over many years as Markle-Bullers Coal Company. 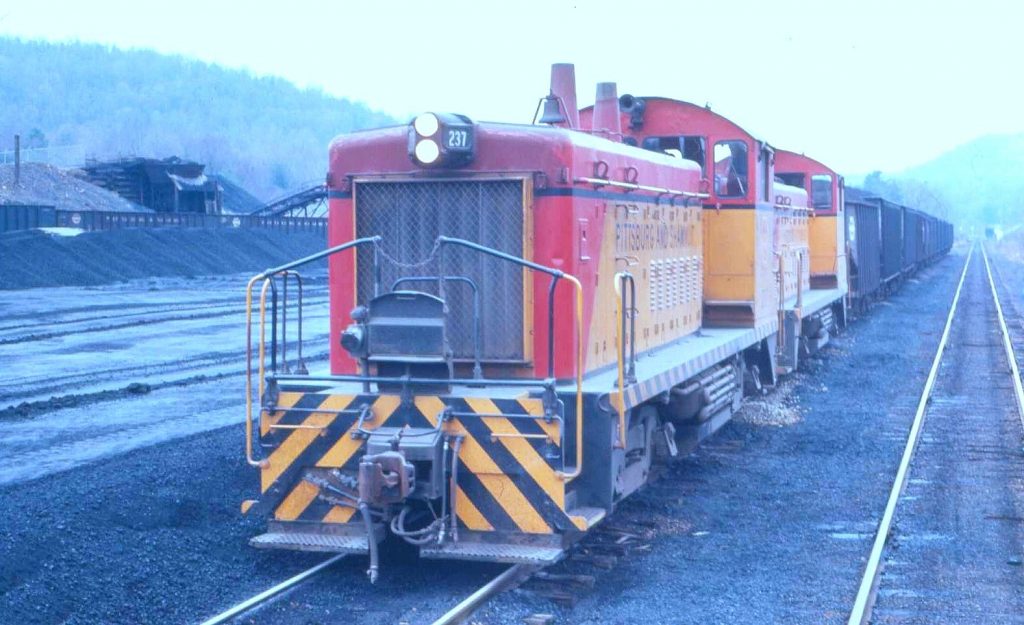 Kurt Reisweber took this photo at Markle in the early 70’s, this was quite a busy spot on the Shawmut!

Dig this primitive loader a Colwell from long ago.  This time, trucks dumped at ground level and the conveyor belt carried the coal into the processing area and the chute into the hoppers was much lower.

Keep checking this new section, we have many more coal loader photos to add as we dig, dig, dig through many photos!